Diagnosed with gluten sensitivity more than 20 years ago, Carol Kicinski has motivated millions to live healthy and happy gluten- and allergen-free lives. Carol’s core philosophy is “Look at the world of food in terms of what I CAN eat – not what I can’t – and look how much healthier I am because of it!” Carol is a TV chef in her seventh season of monthly episodes on NBC-based Daytime TV. The show is nationally syndicated to 191 TV stations and Dish Network. She has a monthly viewing audience of 2.2 million viewers.

With an annual readership of over 4 million, she is the Founder and Editor-in-Chief of Simply Gluten Free magazine, a nationally published print and digital magazine dedicated to the gluten- and allergen-free lifestyle. The magazine’s purpose is to educate, assist and inspire those with celiac disease or a sensitivity to gluten, dairy, nuts, grains or other allergenic elements, and also assist those with vegetarian, vegan, and Paleo diet preferences.

She launched the first issue in November/December 2012 and it has since become the best-selling and most popular gluten and allergen-free lifestyle magazine in America and Canada. The magazine was awarded the “2013 Hottest Launch” by Media Industry News (MIN) in Dec 2013. Barnes & Noble rates the magazine as #2 in Diet & Nutrition (second only to Cooking Light) and #15 in Food & Wine (out of 1,200 mags).

Carol started her career in the gluten-free industry as a contracted recipe developer for over 40 major corporations. In 2007, she founded Simply Gluten Free, a gluten-free recipe and lifestyle blog and website.

Her fans have made her website and her very active blog one of the top gluten-free websites in the world, with more than 775,000 monthly page views and 180,000 unique visitors per month. The blog was awarded “One of the Top 60 Must-Read Health Blogs in America Today” in 2012. Her Facebook has more than 300,000 Followers.

She is an industry leader and advocate, speaking at over 100 conferences and expos about gluten-free living and doing many cooking demonstrations across America. She has brought together hundreds of bloggers from all over the world with the online Gluten Free Global Bloggers Community and has brought together hundreds of international support groups in the online Celiac Support Groups Community.

In a professional career prior to her recipe development, Carol was ahead of the sustainable energy curve as the Financial Controller for a $32M Solar Corporation. As a humanitarian and adventurer, Carol has assisted the International Red Cross around the world and was one of the first responders at Katrina’s Central Command assisting the troops. She’s lived to tell about being charged by elephants and rhinos (literally) and has dived with Great White sharks in South Africa.

Fun, interesting, and accomplished, Carol’s simplest passion is “making gluten-free recipes that are not just ‘good for gluten-free’ but just plain good, period! And then having others make the recipe and love it.”

Simply Gluten Free’s purpose is to provide simple, beautiful solutions to the gluten free home cook. Carol loves hearing from readers. Please feel free to leave comments, contact her via email at Carol.k[at]SimplyGluten-free[dot]com or find her on Facebook at Simply Gluten Free.

Gluten-free Blogger since 2007 – Educating hundreds of thousands of people on gluten-free cooking and living through her website/blog. It has grown to one of the largest, most respected and visited gluten free sites in the world – usually always on page #1 on Google for the topic.

Recipe Developer for over 18 Years – Carol’s cooking skills and recipe development grew out of the necessity to cook for a growing family and became gluten-free centered after she was diagnosed as gluten intolerant about 20 years ago. With more than 800 recipes, her stated goal has always been to create DELICIOUS FOODS that are also gluten-free. 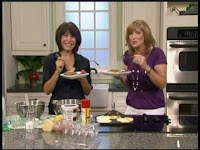 Carol debuted on Daytime TV in July 2009 on WFLA (NBC) – Tampa, Florida. After many successful repeat appearances, she is now a monthly contributor as “The Gluten-free Chef” for Daytime TV with national syndication to 191 stations in 106 markets. Carol is very proud to be working with her wonderful show hosts, Cyndi Edwards and Jerry Penacoli.

In November 2012, Carol started and published the first issue of Simply Gluten Free magazine, a high-quality, lifestyle magazine for the gluten and allergen sensitive community which also includes those on vegetarian, vegan and Paleo diets. It is dedicated to providing information and inspiration in order to make healthy lifestyle choices for oneself and the family. The magazine quickly established its popularity, as the store sales in Barnes & Noble, Books-a-Million, Whole Foods, Sprouts, Natural Grocers, Balducci’s, Andronico’s and hundreds more health food stores across America and in Canada sold out and the many subscribers thanked her for a magazine they had long awaited for. In December 2013, Simply Gluten Free magazine received the “Hottest Launches of the Year” award by MIN. Simply Gluten Free was awarded alongside such longstanding mainstream magazines as Marie Claire, TIME, Glamour, Bon Apetit, and many more well known titles.

As a result of her delicious recipes, Carol was awarded a cookbook contract with Thomas Dunne Books, a division of St. Martins Press. Simply…Gluten Free Desserts is loaded with 150 dessert recipes – cupcakes, cookies, pies, sweet breads, puddings, ice creams, cakes, and many other wonderful delights – all gluten-free and many dairy-free as well. Those who have been taste-testing the recipes are amazed at the flavors and the originality – many desserts never before created! Available in all the major bookstores, on Amazon, Kindle or on our online shop. Carol’s second cookbook, Simply…Gluten Free Quick Meals, is all about gluten free meals and getting them on the table quickly!

Carol’s third cookbook, Simply Gluten Free 5 Ingredient Cookbook, features more than 200 delicious recipes and tips, with beautiful full-color photos for each. It was published in summer 2016 and quickly became a best-seller.

Gluten-Free Contributor – Carol has written and published articles in over 650 newspapers, magazines and publications about gluten-free living and cooking – disseminating her popular gluten-free recipes to readers around the world. Carol contributed gluten free recipes monthly to Martha Stewart’s Whole Living and also to many of the celiac non-profit groups.

Unable to get the high-quality taste and texture that she demanded in her recipes from existing gluten-free flours, Carol spent months developing her own Gluten-free All Purpose Flour blend that TASTES and BAKES just like regular wheat flour.

A certified Le Cordon Bleu Chef tested the flour for weeks in everything he could cook and bake – cakes, pies, pastries, breads, sauces, desserts and meals – it passed with flying colors! Carol’s many taste-testers were equally amazed and pleased!

Founder of the Gluten Free Global Community – This highly popular platform for over 400 gluten free bloggers around the world is serving the blogging community daily as Kicinski says, “I have met so many amazing people, both virtually and in person, through the world of gluten-free food blogging, so I wanted to create a space for us all to get to know one another.” Humanitarian – A little known fact about Carol is she has made many trips within Africa – donating her time and skills to the Red Cross in Mali, Lesotho and Swaziland. Also, when Hurricane Katrina devastated New Orleans, Carol dropped what she was doing and within 48 hours was at the “ground-zero” Central Command, volunteering and assisting the men and women of our Armed Forces and the Red Cross as they worked around the clock to save lives and secure the area. They deeply appreciated her cheer, humor, and effective help!
Simply Gluten Free